Cart Your cart is empty

Porcelain is a ceramic material made by heating materials, generally including kaolin, inakiln to temperatures between 1.200 and 1.400 °C (2.200 and 2.600 °F). The toughness, strength and translucence of porcelain, relative to other types of pottery, arises mainly from vitrification and the formation of the mineral mullite within the body at these high temperatures.

Porcelain derives its present name from the old Italian porcellana (cowrieshell) because of its resemblance to the translucent surface of the shell. Porcelain can in formally be referred to as china or fine china in some English-speaking countries, as China was the birthplace of porcelain making.

The composition of porcelain is highly variable, but the claymineral kaolinite is often a raw material.

Other raw materials can include feld spar, ball clay, glass, boneash, steatite, quartz, petuntse and alabaster.
Porcelain originated in China. Porcelain manufactured during the Tang Dynasty (618–907 AD) was exported to the Islamic world, where it was highly prized. Early porcelain of this type includes the tri-colour glazed porcelain, or sancaiwares.

By the time of the Ming Dynasty (1368–1644 AD), porcelainwares were being exported to Europe. Some of the most well-known Chinese porcelain art styles arrived in Europe during this era, such as the coveted blue-and-whitewares.

In 1712, many of the elaborate Chinese porcelain manufacturing secrets were revealed throughout Europe. Von Tschirnhaus and Johann Friedrich Böttger were employed by Augustus the Strong and worked at Dresden and Meissen in the German state of Saxony. Tschirnhaus had a wide knowledge of science and had been involved in the European quest to perfect porcelainmanufacture when in 1705 Böttger was appointed to assist him in this task. The Meissen factory was established in 1710 after the development of a kiln and a glaze suitable for use with Böttger's porcelain, which required firing at temperatures of up to 1,400 °C (2,552 °F) to achieve translucence. Meissen porcelain was once-fired or green-fired.

The three most popular porcelain manufactories are in Meissen, Vienna and Venice.

The Hungarian porcelainmanufacturing began relatively late in the 19th century. The first factory was founded by Ferdinánd Bretzenheimon his estate of Regéc, Telkibánya in 1827. We can find the traditional folk articles of Hungary like flask that was made with greenish-white glaze glazed at first than later changed to white. 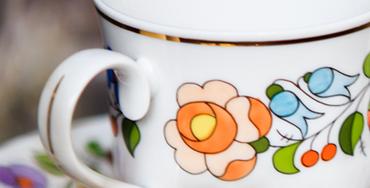 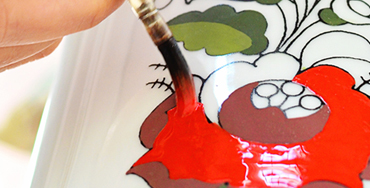 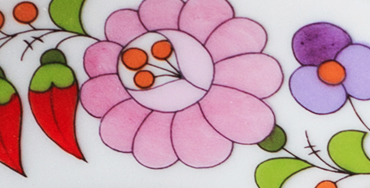 The history of „the Kalocsa pattern”